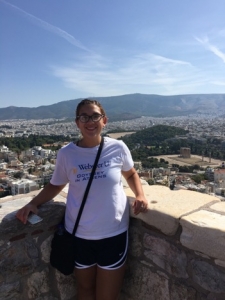 The author on top of the acropolis. Photo Credit: Kalee LaPointe

Learning a new language is tough. Well, for me it is at least. I’ve grown up around Spanish since I was born and have even taken 3 years of it in high school and 2 semesters in college, but I’m still not fluent. So, when I was registering for classes for my study abroad semester in Greece, the thought of taking a Greek language course was a daunting idea! The letters, sounds, and just about everything seemed so drastically different than anything I was used to. My quick Google search of “Greek words to know” resulted in a case of confusion and anxiety. However, thanks to a couple of great advisers and exactly 3 credits room left in my schedule, I found myself registered for an Elementary Greek language course for my first seven-weeks in Athens. And let me tell you, I’m so glad I took the course! I learned more than I ever imagined I would (some of which I actually still remember!).

The first few classes were intimidating to say the least. I already had about 10-pages of notes, most of which looked completely foreign to me with letters and symbols I’d vaguely remembered seeing in math equations or anything dealing with fraternities and sororities. We spent what seemed like not long enough going over the alphabet, and trying to pronounce the letters was a catastrophe. The sounds felt and sounded so odd. Although, at one point we all learned how to write and say our names in Greek. Somehow seeing my name portrayed in these different symbols, “Καλη” had me in a state of awe and kept me intrigued.

After only a week, I was amazed at how much of the language I had absorbed. While there were so many aspects that were confusing, daunting, and intimidating about Greek—it was amazing. I was continuously surprised at how I was able to immediately use everything we were learning in class when I was out and about, even just going down the street to eat. I was lucky to have an amazing teacher who actually made learning the language fun and interesting, which just added to the whole experience. I found myself writing and speaking in a beautiful language I once knew little to nothing about, but now found myself surrounded by. The letters on street signs slowly went from foreign to familiar, and I would find myself reading out words from signs as I took the metro. As I walked past people, I  was slowly able to understand a few words here and there. The way it felt to understand something that once seemed just about impossible was simply amazing.

After about 7-weeks of classes, we had a fall break and I was so excited for my mom to come visit. I wanted to show her all around Athens of course, but I also couldn’t wait to show her everything I’d learned. Needless to say, she was definitely surprised. I would say “γεια σας” to people passing by and “ευχαριστώ” after ordering. The look of surprise and admiration on her face was heartwarming. At one point, this older couple came up to me asking for something in Greek and although I couldn’t understand all of what they were saying, I was able to respond to them completely in Greek. I said, “Συγνώμη mιλάω πολύ λίγο ελληνικά”, which means “sorry I speak very little Greek.” Even though what I said wasn’t anything conversational, I was so shocked at how effortlessly it came out!

Although the language course was just a basic, introductory level, I’m so glad I took it. Taking the time to learn Greek is something I will forever be grateful for. Not only is it a beautiful language, but I also feel like it really added to my overall study abroad experience. So many people travel to different countries without making even the slightest effort to understand the people or the culture. I saw this countless times while in Greece: while English is very popular, especially around Athens, so many people just assumed they could solely rely on it to get around. And while yes, that is totally doable, there’s just this overwhelming sense of appreciation and welcoming when you make even the slightest attempt to communicate with people in Greek. It definitely wasn’t easy, and I’m not fluent by any means, but I have such a deeper appreciation and love for Greek now—I still try to use the language whenever I can!

Kalee is a senior from San Angelo, Texas. Aside from explaining where that is, and no it’s not near Dallas, she is completing a major in English with a concentration in Literature and a minor in Psychology. With a passion for reading, writing, and sharing that passion with others, she joined the Q this year as an editor and writer.