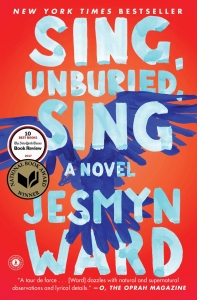 In the fictional Mississippi town of Bois Sauvage, Jojo assists his grandfather to slaughter a goat. It’s Jojo’s thirteenth birthday, and he narrates for the reader: “I want Pop to know I can get bloody.” Yet, when Pop makes a slit through the goat’s stomach, exposing the animal’s innards, Jojo finds he has trouble concentrating. The goat’s meat will contribute to a special meal for Jojo’s birthday. He recognizes the goat’s death—unpleasant as it may be—constitutes an act of nurturance as he follows Pop into the house: “[a] trail of tender organ blood … that signals love” dripping in his grandfather’s wake. Jesmyn Ward’s novel, Sing, Unburied, Sing, is full of moments like this one— moments that weave the bitter in with the sweet. On the surface, Ward’s fifth book is about a Southern family’s experiences of coming-of-age, addiction, terminal illness, and incarceration. As the narrative unfolds, Ward reveals Sing, Unburied, Sing to be a series of unflinching character studies, reflecting how the legacy of slavery still haunts Americans to this day.

The bulk of the novel is narrated by Jojo and his mother Leonie, the two taking turns back and forth, chapter by chapter. Leonie is in a tumultuous relationship with the father of her children, Michael, a white man who is serving time in the notorious state penitentiary, Parchman. Leonie works shifts at a local bar and gets high with her friend Misty. When she’s on meth, Leonie believes she can see the phantom of her dead brother. Her brother, Given, was killed years ago. He was shot by a cousin of Michael’s in an act of violence. The sheriff, Michael’s father, claimed it was a hunting accident. Michael’s sentence is almost up, and Leonie, Jojo, his three-year-old sister, Kayla, and Misty—whose boyfriend is also in the prison—take a trip up north to Parchman to bring Michael home. Thus, the central journey of the novel takes shape: a road-trip to Parchman penitentiary.

Leonie’s father, River (or Pop), served time in Parchman in the late 1940s. There is a story River tells Jojo, about a boy named Richie, whom he knew in Parchman, that River can never bring himself to finish. The ghosts of lingering souls find earthly forms in Ward’s novel, and Parchman, too, appears as a kind of specter: a prison with a history of being a labor camp, housing primarily black men through the 20th-century, in which death was often the result of a sentence. River describes for Jojo how the land up north, where Parchman is located, is distinct: “…fields stretching on, the trees too short with not enough leaves, no good shade nowhere, and everything bending low under the weight of that sun: men, women, mules, everything low under God.” On a phone call with Leonie, Michael says of Parchman: “This a place for the dead.” Parchman appears suspended in time, a physical reminder of the legacy of American racial violence— a timeless, open wound.

Over the course of Sing, Unburied, Sing, Ward illustrates scenes of healing and sickness in gorgeous prose. Leonie’s mother, Philomène, is sick with cancer. Philomène was a healer in her youth. She tells Leonie that her mother’s midwife taught her all she knows of restorative herbs and plants. On the road, Kayla gets sick in the car, and Leonie searches for tincture ingredients in the woods surrounding a dilapidated gas station. She recalls what Philomène once told her: “…if [you] look carefully enough, [you] can find what [you] need in the world.” Leonie is skeptical: “Sometimes the world don’t give you what you need, no matter how hard you look. Sometimes it withholds.” Ward writes with compassion about Leonie’s cynicism, her poor parenting choices, and her drug abuse, but never in a way that neglects honesty. The brilliance of Sing, Unburied, Sing is made tangible in the subtle, emotionally driven interactions between family members.

Ward’s latest novel is an ode to the lingering effects of historical trauma. The ghosts of America’s fraught and recent past materialize amidst the characters of the present. Moments of heartbreak occur most vividly in instances when the characters are unable or unwilling to care for one another. It is the absence of physical gestures of love, rather than acts of violence, which render Leonie’s and Michael’s connections to their children so challenging to witness. Yet, just as River cares for Jojo, Jojo cares for Kayla— and his care is ceaselessly tender. Leonie observes of her children: “…they turn to each other like plants following the sun across the sky. They are each other’s light.”

Sing Unburied Sing is an unconventional road-trip novel, a ghost story, and a stark, lyrical depiction of the rural South. Most memorably, Ward’s novel is a masterfully crafted representation of how America’s past continues to inform the present.

Sing Unburied Sing was the 2017 winner of the National Book Award, a finalist for the Kirkus Prize, Andrew Carnegie Medal, Aspen Words Literary Prize, and a New York Times bestseller. Jesmyn Ward is the recipient of a MacArthur “genius” grant from the John D. and Catherine T. MacArthur Foundation. She teaches English at Tulane University.

In another life, Katharine Sherrer spent her days weaving, reading, and traversing moors covered with wildflowers. In this life, she is a junior literature major with a minor in history at Goucher College. Her pop-culture interests span across genres and demographics. She reads classics and contemporaries; memoir; criticism; young adult sci-fi/fantasy; queer, postcolonial, and feminist theory.