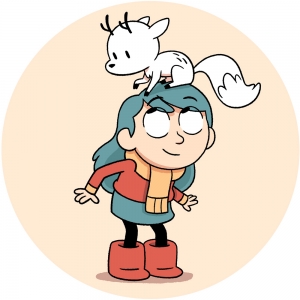 Hilda is a charming and overall very likable series on Netflix which I highly recommend checking out. It is the type of show I could see people watching on a cold fall night just before winter has fully settled in the air, or during a snowy winter’s day when you have nothing to do but curl up with a nice cup of hot cocoa (extra marshmallows, butterscotch syrup, and whipped cream) curled up nice and tight with a favorite pillow or blanket for warmth. It’s one of those unassuming shows that mostly fly underneath people’s radar, but I personally think it deserves an advocate, despite how simple and unassuming it might be. It may just be a silly little kid’s show, but once in a while I think silly little kid’s shows deserve their limelight too, and Hilda is one of those times.

If I had to equate it to other pieces of media, I would say it’s somewhere along the lines if Gravity Falls and Over the Garden Wall had a slightly less neurotic love child. A calming atmosphere with soothing tones to every episode, Hilda is the perfect Netflix show to watch if you want to be transported back to days of forgotten childhood where adventure and exploring the world was all that mattered. The relaxed story throughout the series follows the title character Hilda along her journey with her friends throughout the city of Trollburg and all the wild types of things they get up to.

The series touches on many topics that people can relate to even in college. Things such as leaving one’s home behind for a new one, trying to fit in, conquering your fears, and making new friends. While it does touch on some mature topics now and then, it handles them in a very nuanced and relaxed way, more focusing on the characters interacting with each other, rather than dwelling on issues and hitting you over the head with moral lessons and ethical philosophies. The animation style is also a breath of fresh air; soft earth tone colors scatter the screen in a relaxed and flowing manner. While it still grabs one’s attention, it doesn’t overwhelm the senses with erratic and overwhelming bursts of color every moment on screen. Even if cartoons aren’t your thing, I would recommend checking out the overall playlist of the show. It is super soothing and I would really recommend adding it to anyone’s study playlist if they like soft bouncy music without any lyrics that evoke the sense of wonder and adventure. Personally, those kinds of songs are the ones that get me through any form of math class. Not only that but also the main characters are also very charming as well, each one memorable and likable in their own unique way with a variety of personalities. If whimsical music and somewhat childish antics aren’t your thing, perhaps give this one a pass. If you are like me and love a burst of nostalgic intermingled with lovely calming visuals, interspersed with a soothing yet whimsical overall orchestration in the background swelling to reveal beautifully drawn landscapes, I highly recommend this show.

Benji Gutsin is a senior. They are an English major with a concentration in creative writing and a History minor. They like to write short stories in their spare time and have been writing a novel that they hope to publish one day.