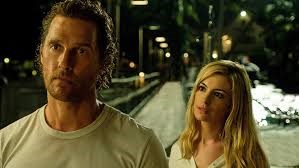 Baker Dill: “I need you to deliver me from temptation.”

Last year, it seemed that the whole film world collectively got up and declared Gotti the worst film of the year upon release. And while it wasn’t –– that particular dishonor goes to Holmes and Watson –– it’s all too easy to see where critics were coming from. Gotti was a special kind of bad, a movie where ineptitude and poor decision making seemed to become a character in of itself. Though it only came out in June, it seemed primed to be the butt of the joke even as December came to a close.

And now, we’ve got another impossibly bad movie, another contender for the “surely, this is as bad as it gets, right?”, except we’re only in January. Holy shit. If this is any indication, we’re in for a bumpy ride. A hilarious, fascinating, often awe-inspiring ride, and one in which we see Matthew McConaughey’s “O” face and bare ass way too much (if such a thing were possible), but still…batten down the hatches. Here we go.

The crazy thing is, I was looking forward to this one. I’m a die-hard neo-noir fan, and according to the trailers, that’s exactly what this was, though in my defense, the trailers didn’t give any hint to how batshit insane this movie is. The movie initially seems to follow Matthew McConaughey as a washed up fisherman, completely obsessed with catching this one big fish. He really wants to catch this big fish, and everyone knows he wants to catch this big fish, and everyone is always talking about how obsessed he is with catching this big fish, until I’m like, “Alright, alright, enough with the big fish.” This was less than a third of the way through the movie.

I’m gonna describe the first scene of the film real quick. We open on an extreme close up of a little boy, before zooming into his right eye to reveal the wide ocean, where Matthew McConaughey is sunburnt and fish hunting. In order to supplement his income, he allows himself to be hired out by rich old dudes to fish on his boat. When Matthew McConaughey’s lure catches the big fish, one of the old dudes try to take his rod away. Remember, this is the service that this man has paid for. So, the old guy tries to take Matthew McConaughey’s rod away, saying, “I paid you $700 cash for this!” Matthew McConaughey responds in the only way he knows how: he unsheathes his knife and charges at the old guy, hissing and spitting like mad. The only reason he doesn’t skewer the guy right then and there is the timely intervention of his first mate Duke (Djimon Hounsou). That Duke knows just what to do here implies that this isn’t the first time Matthew McConaughey has attempted to murder the people hiring him. After a valiant struggle, the fish gets away, and the old guy who has already paid $700 says, “If you think I’m paying you one cent for this, you’re out of your mind.”

What makes this attempted murder even more bizarre is that the rest of the movie hinges on Matthew McConaughey’s unwillingness to commit murder, this time actually justifiable. Anne Hathaway, who is introduced into the movie with a fake sparkle on her ring and a truly bizarre camera spin, reenters Matthew McConaughey’s life with a startling proposal: take her new, deeply abusive husband out to sea, and kill him before he hurts her and their son any more. Jason Clarke plays the husband, and in an early scene we see him talking about a rumor he heard regarding the cheapness of hookers on the island. This scene climaxes with Clarke saying the line, “I gotta hit me up with some of that $10 ass,” and if you thought the theater I saw this in wasn’t laughing uproariously…well, they were.

The film is filled with lines like that. Matthew McConaughey (whose name is technically Baker Dill, but c’mon; it’s Matthew McConaughey) describes his backstory as such: “I went away to war. The war fucked me up. When I came back, she was with him…except I never really came back.” Duke, his shipmate, describes their fortunes as such: “Ever since your wife died, we ain’t caught jack shit.” Matthew McConaughey’s abused son has a photo of his old man that has the words, “ME AND DAD BACK THEN” on the back. I literally don’t have the space here to go into all the other weird shit this movie does, with the fish-based dream sequence, the frequently appearing Ominous Seagull of Foreshadowing and Doom, the bespeckled guy everyone just calls “the skinny guy” even though he’s really not all that skinny, and holy shit there’s just so much. It’s genuinely overwhelming.

How did this happen? Steven Knight has two films under his belt, the Jason Statham vehicle Hummingbird (released as Redemption in the US), which I haven’t seen, and the Tom Hardy vehicle Locke, which I did see, and thought was absolutely brilliant. Locke (which at time of writing is available on Netflix, and I urge you to check it out) takes place entirely in one car, yet it is never boring. It is a lesson in technical expertise and pitch-perfect directing. Serenity has actors, including the main ones, looking into camera by accident. It boggles the mind.

Even before the big twist, I had this movie pegged as a serious drama as filtered through the mind of a six year old. I had no idea how right I actually was. Serenity is a movie so bad, so incomprehensible, so fucking weird, that the frequent appearance of Matthew McConaughey’s bare ass barely warrants a mention.