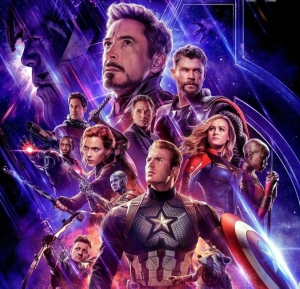 Avengers: Endgame is a wild, ungainly, imperfect mess of a movie. It’s a film that, in all likelihood, will be picked apart in the days and weeks to come. It’s way too long, for one thing, and there are certain plot points that are rushed and characters that are shafted and mistakes that were made.

But I don’t care, because I loved that beautiful mess. It made me feel. It made me gasp. It made me cry. It made me laugh, out loud, and often, and at full volume. It set out to do something, and by God, it actually mostly managed to accomplish just that. More than that, though, Avengers: Endgame was something I kind of wasn’t expecting: an ENDING. This is a movie that actually earns its title by clearly and definitively closing the chapter on a number of things that we’ve been watching for 11 years.

Actually, let’s start there, because that’s kind of this film’s greatest strength and its most glaring weakness. Because instead of spending its entire runtime teasing the future (as a few of these movies have been guilty of), the film spends most of its time celebrating the past. This is understandable, and at times, joyous (not to reveal anything, but the way this film uses older footage is downright inspired on a Forrest Gumpian level). However, it does mean that the film never truly eeks out its own identity, and at times can feel like a 3 hour exercise in, “Hey, remember this thing?” Now don’t get me wrong; it WORKS. I was having an absolute blast sitting there and going, “Why yes, I DO remember that thing!” And saying it could’ve or should’ve been more than what it is feels…ungrateful, somehow. But it could’ve/should’ve? Maybe?

I don’t know. But, for whatever else, this is it, and they DID it. There are callbacks ahoy, and almost every character who’s ever been in any of these damn movies pops up at one point or another (and I really do mean almost everyone; it has to be at least double the cast of Infinity War, which itself was stuffed to the brim), but miraculously enough, the film finds that balance that Thanos was so desperate for. Everyone feels like they get their moment to shine. More than that, the film frequently lets itself slow down, something Infinity War occasionally struggled with. There are quiet, contemplative scenes in this film, real character driven moments that have genuine heart to them. I can honestly say that certain things choked me up.

And the film is so damn fun. The quips are at their best: mostly non-distracting and hella funny. The situations are inventive and unpredictable, mostly. The visuals are frequently stunning (PLEAAAASE do not ruin this film by seeing it in 3D. It’s dark enough already, and 3D is generally awful. Trust me, the spectacle doesn’t need it). Not since Return of the King have we had a 3 hour film this shockingly economical. It’s genuinely tough to imagine when a good time for a bathroom break would be.

It’s been 11 years. 22 movies, the worst of which was “meh.” We are at the end of one of the grandest cinematic experiments of all time, the success of which has yet to be matched (weirdly, the only “cinematic universe” that’s come close is the Conjuring-verse, and even that’s pretty hit-or-miss). Maybe I’ll sour on this film, though I hope I don’t. Because right now, I’m very happy with where we are.

We’ll be back in the MCU soon enough. But for now, we can rest. It’s over. And it worked. I can’t believe it worked.