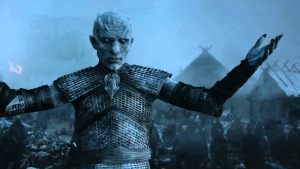 ****This article is long and full of spoilers. Proceed with caution****

After a two-year long fevered wait, audiences on April 14th were treated a somewhat underwhelming but no less entertaining return to the Seven Kingdoms of Westeros of the hit TV show Game of Thrones. This first episode of the final eight season, directed by David Nutter, was thematically focused on setting the stage for conflicts to come later in the season while thematically calling back to the first episode which debuted nine years ago. We were treated to several long-anticipated reunions and some new questions were raised about the nature about the show’s long-anticipated ending. However, for a show famous for its bloodiness and willingness to kill off its main characters, only one minor character was sacrificed for this season’s opening episode.

The show opened on a young boy running through the Winterfell village and climbing up a tree to get a better view of the incoming Targaryen army led by Jon Snow (Kit Harington) and Daenerys “Dany” Targaryen (Emilia Clarke). This the first of several deliberate circular callbacks to the first episode “Winter is Coming” which premiered in 2011, when Arya Stark (Maisie Williams), then a young rebellious girl from a noble family, scaled a wagon to witness the entourage of King Robert Baratheon arriving. We, the audience, are then subsequently treated a reunion between Bran Stark (Isaac Hempstead-Wright) and Jon which comes off as heartfelt but surprisingly distant and emotionless. What little emotion there is in the scene is abruptly interrupted by Bran’s declaration that the wall has fallen and that one of Dany’s dragons, Viserion, has been captured and zombified by the Night King. We are also introduced to what will surely be one of the central conflicts of Season Eight: the relationship between Sansa Stark and Dany which could best be described amid wintry conditions as “icy.” Sansa is mistrustful of Dany, a foreign imposter, and resentful of Jon for having seemingly thrown away the title of King in the North for love.

The episode’s theme of setup by showing the unrest of the Northern lords who are (probably rightfully) outraged about their Jon’s acquiescence to Dany. In a brief sequence moment, we see a young lord, Ned Umber, sent to retrieve the remains of his people from his castle The Last Hearth which lies just south of The Wall. We are then treated a philosophical moment between the show’s great thinkers as Tyrion Lannister (Peter Dinklage), Varys (Conleth Hill), and Davos Seaworth (Liam Cunningham) muse on death, old age, and the innocent of youth. The following sequence was one of silliness, which saw Dany and Jon traipse about the north riding on the back of dragons, in a scene reminiscent of How to Train Your Dragon with all the soppy steamy romance attached. They land at a waterfall and Dany declares that together that could stay there alone forever. This is a second prominent callback, this time to Jon’s relationship with Ygritte in Season Three, Episode Five “Kissed by Fire” where Ygritte asks Jon, alone in a cave, to run away and live apart from society forever.

The show then moves to King’s Landing and Cersei Lannister (Lena Heady) who, as ever, is hell-bent on a quest for revenge against her enemies. In her hour of great need, she has turned to Euron Greyjoy (Pilou Asbaek) and the mercenary Golden Company army. Her plan is to wait for the Northern armies and the undead army to destroy each other and then to seize and kill of whatever remains. Having cast off her final moral compass in her brother Jamie Lannister (Nikolaj Coster-Waldau), Cersei is now unburdened by any desire other than to protect her unborn baby and to destroy her enemies even if it means having distasteful sex with Euron. In a brief scene, the show makes room for a widely-celebrated rescue of Yara Greyjoy (Gemma Whelan) from Euron’s clutches by her PTSD-affected brother Theon (Alfie Allen). We are reunited with Bronn (Jerome Flynn), who is partaking in the pleasures of a brothel. In the episode’s humorous callback, we hear from one of the prostitutes that a ginger solider, heavily implied to be Ed Sheeran’s infamous Lannister solider, has been severely burned in the loot train attack of Season Seven. Given the negative publicity against Game of Thrones over his portrayal, his unfortunate fate is likely to be well received the Thrones fandom. However, Bronn is interrupted in his brothel exploits by the Qyburn, the queen’s personal hand, to establish his season’s story arc: Bronn is tasked with finding and killing Jaime and Tyrion in the North, his former employers and erstwhile friends.

We return to Winterfell to connect with Samwell “Sam” Tarly (Jon Bradley) who as usual is ensconced in the library. He is interrupted by Dany and Jorah Mormont (Iain Glen), who have come to thank him personally for curing Jorah of Greyscale in Season Seven. But the Samwell appreciation goes horribly awry when Dany informs him she executed his father and brother for not bending the knee following the loot train attack. Sam runs out of the library deeply distraught, only to run into Bran who informs him that the time has come to inform Jon of his true parentage. We follow Sam to the crypts where he meets with Jon, but the reunion is cut short as Sam – in one of the most-anticipated scenes of Game of Thrones – informs Jon of his actual parents, Lyanna Stark and Rhaegar Targaryen, whose bloodline gives him a more legitimate connection and right to the Iron Throne than Dany.

The episode reaches its conclusion in the Last Hearth castle. We meet up with the remnants of the Brotherhood without Banners and the Night’s Watch, who have fled the broken wall for Winterfell. However, in the bowels of the castle they make a grisly discovery: poor young Ned Umber has been impaled against the wall amidst the ritual spiral of the Night King and his undead army. In a doubly-chilling scene, Brotherhood and Night’s Watch realize they are cut off from Winterfell by the undead army. While they stand talking, the corpse of Ned Umber rises from the dead as a wight and begins to shriek and attack them. The wight is quickly set ablaze without casualties but not before everyone including the audience is deeply disturbed by the gravitas of the situation and the upcoming conflict. The episode ends with Jaime Lannister arriving on horseback to join the fight against the undead army. However, he is greeted first by Bran who, all the way back in Season One, was crippled by Jaime after being pushed from a tower for witnessing his incestuous relationship with Cersei. The camera pans over Jaime as emotions of shock and guilt play across his face before the episode cuts to black.

The primary role of “Winterfell” was to set the stage for the upcoming season. It did so in well-executed but unspectacular fashion. By Game of Thrones standards, it ranks among the tamest episodes, with only one-character death and three naked women, a considerable branching-out for a show which has staked its reputation and fame on having both in large amount. The episode hints at what is to come and served mostly as an extended catch-up and trailer for bigger and better battles and the final, epic conclusion. The episode will not live long in the memory, but it serves as a placeholder which successfully whets the appetite of fans to tune in, next week, for the second of the final six episodes of this decade-spanning, generation-defining TV show.

Hello! My name is Jibril Howard and I am the CoEditor-in-Chief for the Q. I am a soccer lover, political junkie, caffeine addict, and a hopeless chess player.