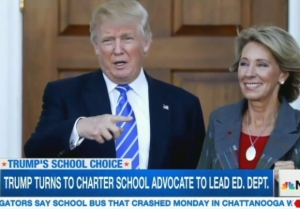 The phenomenon we have been witnessing over the course of the last several months surrounding the U.S. Department of Education and newly appointed Secretary of Education, Betsy DeVos, has been an enlightening microcosm of what’s been happening on the political left of late. The ordeal has been a controversy since the beginning, when President Trump chose DeVos as his selection for the position, and came to a peak Tuesday, February 7th when she was confirmed by the Senate with Vice President Pence’s tie breaking vote. These last few months have illuminated several things.

First, Mrs. DeVos’ fierce opposition in the Senate showed that Democratic politicians appear to be more beholden to the wishes of the teacher’s unions—generally one of their largest benefactors—than any other interest group in the country (it turns out money talks for Democrats too). Second, this opposition unsurprisingly showed what the Democrat’s political tactics will be like during the Trump presidency, and that much of the left has not learned their lesson following Trump’s election. Many continue to see their way of conceptualizing and solving issues—in this case the education system—as the only way to look at things; anyone who deviates from their perspective is on the other team and is subject to ridicule. Lastly, and most importantly, the outcry against Mrs. DeVos shows how little people at Goucher and across the country know about school choice. Mrs. DeVos and school choice should be exactly what members of the Goucher community were looking for in this fresh Department of Education if they are as committed to the task of social justice as they say they are.

School choice is in many circles a dirty term and Goucher College seems to be one of those circles. What is interesting about that, is the level of “school choice” a sizeable chunk of those who attend this school were likely afforded in their education before Goucher. This in part has to do with the relative socioeconomic status of many Goucher students, but generally speaking, school choice is exercised more than people think. 43 percent of American children (23.8 million K-12 students) already exercise school choice in several ways. According to the74million.org, 8.2 million moved their homes to attend a more desired school, 5.9 million chose a traditional district school other than their assigned school, 5.3 million enrolled in a private school, 2.7 million enrolled in a public charter school, and 1.8 million were homeschooled The only free school choice options here are public charter schools and traditional district options—not a large piece of the pie. While yes, anyone is free to move where they live, nobody should have to in order to obtain a decent education, and aside from that, moving to a better school district is a luxury that more well off families may have, but poorer families often do not. Countless studies and experiments have shown time and time again that charter schools improve educational outcomes for poor children, and yet there is such an odd amount of negative press surrounding them, particularly in liberal dialogue. Expanded school choice does not mean the privatization of American schools. It means offering more options to those who need them, so their future is not bleak just because of their socioeconomic status.

The proponents of expanded school choice understand that many children have adequate existing public school options available to them, and they celebrate this, because the idea that drives school choice is providing the best educational options to kids, regardless of the type. Nobody knows the dynamics of specific school districts better than the local school boards looking over them and the states that these school districts exist in. This is why Mrs. DeVos is so adamant in her plans to shrink the Federal government’s role in America’s school system. She has voiced a desire to give power back to the parents, educators, and administrators in their districts, power which has been flowing in the direction of the Federal government since the Bush administration, a trend which has only increased in the past eight years.

Additionally, there are two very common complaints about Mrs. DeVos, particularly with teachers and at Goucher. The first is that she has no experience as an employee of the public education system and is, therefore, unfit for the job. Suggesting that she must know all the ins and outs of education specifics like designing curriculums or writing lesson plans for this position is ludicrous. What Betsy DeVos has experience in is politics, and the job which she has been selected for is inherently a political one. The second claim goes along the lines of the idea that her spending millions of dollars to exert influence over school systems during her lifetime somehow disqualifies her for the job. To address this, I would like to direct attention to the massive national teachers unions which annually spend over $30 million on political causes. They can do this because of the dues most teachers have to pay them and watch them spend with little to no input from the actual teachers themselves.

I got the chance to meet Secretary DeVos last Friday in Washington D.C. and she was nice enough to talk to me for a few minutes. Our conversation was certainly not consequential, however it did highlight a few things about her. She is clearly a strong, powerful woman, who despite her vast fortune and life accomplishments, does not consider herself above taking a salary of one dollar to serve the public. She is someone who would spend four hours on a Friday afternoon meeting people she doesn’t have to, after spending a second straight week getting attacked (worse than usual) by people on the right and left who do not share her views on education reform. These characteristics suggest to me that perhaps instead of selling Mrs. DeVos and her ideas short, we should give them a chance. She is one of the few people in the Trump administration who has a truly clear, positive view for the future; the left should give her the same benefit of the doubt they often afforded the Obama administration.

Drew Phillips is a Political Science / Economics double major and a member of the Goucher men's soccer team. He writes for the Q in an attempt to provide as reasonable a perspective as possible in regards to issues that affect the Goucher Community.