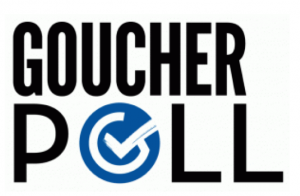 On February 20th and 21st, the Goucher Poll released the highly anticipated results from its latest round of questioning across Maryland. The poll, which is conducted out of the Sarah T. Hughes Field Politics Center by Dr. Mileah Kromer, asked Maryland residents for their opinions on a variety of statewide and national issues, from September 12th-17th. The poll surveyed 800 adults from all areas of the state and has a margin of error of +/- 3.5 percent.

The Maryland governor’s race, named one of POLITICO’s 10 to watch, is heating up, and many are looking to the Goucher Poll to see where things in the state currently stand. Perhaps unsurprisingly, Governor Larry Hogan still has a very high approval rating in the state, with 61% of residents approving of the job he is doing. While this is a good sign for Hogan supporters, only 47% of respondents indicated that they were leaning toward or definitely voting to re-elect the Governor. On the Democratic side of the race, Rushern Baker leads a crowded field, with 19% of Democratic likely voters saying he would have their vote if the election were held today. 12% of those same voters say that they will be voting for Kevin Kamenetz, while Ben Jealous is slightly behind at 10%. However, it is important to note that 47% of likely Democratic voters are still undecided on their primary vote.

When asked to identify the most important issue facing the state, Marylanders are mostly concerned with economic issues (22%), education (19%), and crime/criminal justice (12%). While noting these issues as most important to them, respondents have an overall favorable view of things in the state—55% say Maryland is headed in the right direction, and 60% hold a mostly positive view of the economy.

Maryland residents may think things are going well in their state, however they do not feel as optimistic about things on the national stage. Only 27% of respondents approve of the job President Trump is doing—down two percent from this time last year—and 11% approve of the job Congress is doing. Even Maryland’s two Senators, Chris Van Hollen and Ben Cardin are struggling to stay above water, earning approval ratings of 37 and 44%, respectively.

Respondents were also asked their opinions on a range of statewide issues, including opioids, youth football, and women in state government. About half of respondents suggested that they personally know someone who has been addicted to opioids and 82% believe that opioid addiction is a major problem in the state; an almost identical 81% say that it is something requiring medical treatment to address. A recent bill introduced in the Maryland general assembly proposes to ban tackle football for children under the age of 14 and state residents are split on this issue—45 percent of respondents support the bill and 49 percent oppose it. Additionally, 47 percent of the state believes that Maryland would be governed better if more women served in elected office, 47 percent believe it would make no difference, and only 3 percent think the state would be governed worse.

If you would like to view the full results of the poll, all three press releases can be found on Goucher’s website under the Hughes Center subheading.

By The Quindecim Staff News: Joe Biden has won both the Electoral College and popular vote.

Drew Phillips is a Political Science / Economics double major and a member of the Goucher men's soccer team. He writes for the Q in an attempt to provide as reasonable a perspective as possible in regards to issues that affect the Goucher Community.

By The Quindecim Staff News: Joe Biden has won both