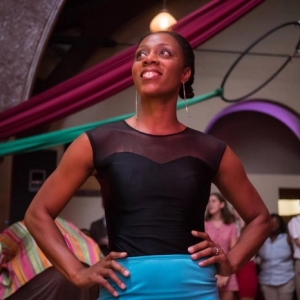 “There is something going on in our culture today; it’s being lost.” This is what Breai Mason-Campbell said in a recent phone conversation. Breai is an African American activist in Baltimore, MD who has dedicated her life to preserving and restoring African American cultural and heritage through dance. She is the founder and director of Guardian dance, a company that, for the past nine years, has taught the history and styles of African American dances like Lindy Hop, Breaking, Locking, Popping, Baltimore Club, and Hand Dance. Guardian has implemented a curriculum teaching these dances to grades Pre-K through 8th at a 100% African American School: New Song Academy in Sandtown, MD. The company is comprised of a team of dancers, including Mason-Campbell, who teach weekly and perform at various events like at the opening celebration of the Smithsonian African American History Museum last October.

What drove Mason-Campbell to create Guardian and more recently, Black Lindy Matters, was a culmination of experiences.

One such experience was at a latino party with her family as a young adult. At this party, salsa music was playing and all generations of people were dancing. Mason-Campbell noticed something special about this community, that the grandparents were putting their grandchildren on their feet and teaching them traditional hispanic dance styles: salsa, merengue, and bachata.

At the time, Mason-Campbell couldn’t put words to why this was so important to see. She wondered why their culture was so well preserved and furthermore, “what is our [African American’s] historical legacy?”

It was through Mason-Campbell’s dance background that she continued to question the cultural forces at play. She had grown up taking dance classes: ballet and modern dance. Although she was grateful for this training, she noted that “it didn’t have deep cultural value.” Ballet was the “aesthetic benchmark for beauty and grace… it was a right of passage.” For many young girls in America, these are the styles of dance they are taught. But why? Why is a European-born dance style so prominent in American culture? “America was built by Africans, it should be more a part of our general consciousness, as should Native-American culture.”

It was interesting to Mason-Campbell that the one visible aspect of African American culture today was the idea of the black entertainer. “When people are trying to get out of poverty, their only access is through a record company, through break dancing, singing, rapping; it becomes so commercial we don’t own it anymore.” And this applies directly to the jazz and  swing dancing of the 1930s.

As a historical dance, Lindy Hop emerged in Harlem, New York during the swing era. The Savoy Ballroom (which has since been demolished) was not only a place to listen and dance to swingin’ jazz music, but it was the only integrated venues of its kind. It broke down racial barriers. Yet swing dancing for African Americans during this time wasn’t just an activity: it was a livelihood, a necessity, a liberation. For most black dancers and musicians, it was an escape from poverty.

Today, Lindy Hop is danced all over the world. Almost every major city in America has a Lindy Hop scene, as well as cities in the UK, Europe, Japan, Korea, China, and Australia. This traditional African American dance was rooted in the United States, it was a necessity, and yet, now it is an activity for a predominantly white dance scene.

When asked what Mason-Campbell would change about the current Lindy Hop dance scene, she didn’t express any negativity towards the majority of it’s often misinformed, unaware, white members. Her goal is to preserve these traditional African American dances through Guardian dance company and the Black Lindy Matter initiative in schools, performances, and dance venues like Mobtown Ballroom.Mason-Campbell hopes to create a deeper cultural appreciation and continuity of identity amongst her students, “I want to put these kids on my feet, share our culture with them, and show them who they are.”