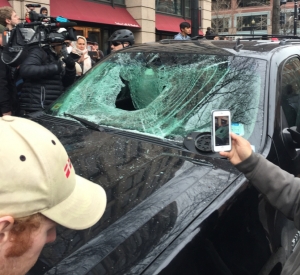 An atmosphere of toxicity hung over the city. As Donald Trump prepared to be inaugurated as the 45th president. There was a palpable tension hanging in the air. Tension that had built up after a year’s worth of anger stemming from one of the most divisive presidential campaigns in American history.

Entering into the National Mall, Trump supporters and protesters had an uneasy coexistence and they made their way through the security checkpoints. At several checkpoints large groups of protesters linked arm to arm blockaded the street to prevent Trump supporters to be able to attend. Besides a few verbal confrontations and a standoff with the police, the protests were largely peaceful in the beginning of the day. On the National Mall near the Washington Monument, there continued to be this unusual mix of groups opposing and supporting the President. Due to the presence of security officials civility was maintained while President Trump took the oath of office and delivered his inaugural address. It seemed at this point that the rest of the day would be relatively peaceful, as the crowds dispersed with no confrontations.

However, it appeared that as former President Obama flew away on Marine one, he took America’s self restraint with him. Within an hour after the end of the ceremony there were reports of violent “Black Bloc” anarchists rampaging through the streets of DC committing acts of vandalism and assaulting Trump supporters and police officers. As I made my way towards Franklin Square, the reported location of these rioters, I received a text informing me that 90 people had already arrested and there was an escalating violent situation. As I approached Mcpherson Square witnessed these groups firsthand as I came across a rally of some sort. A band on stage played music interrupted only by a range of speakers. There was a assortment of radical far left groups occupying the space, the combination of which conjured up a scene which could have been out of the 1960s. Soon after I arrived a group of Trump supporters came and confronted this groups, as these groups shouted back and forth some escalated into direct physical violence. I noticed further up the road there was a very large crowd of people blocking off traffic. I made my ways towards the scene and stumbled into the heart of the violence reported from earlier. Masked protesters faced off against riot police while others were burning a pile of trash in the street and smashing up a nearby limousine and unmarked police car.  Media from all over the world looked on as the situation deteriorated further. One rioter walked past me with a tire he claimed to had stolen off a Trump supporters car. Within what only seemed like moments later this man had tossed the tire onto the limousine and set it on fire. As the burning rubber mixed with liquor bottles, which had been in the limousine, a large and uncontrolled fire continued to grow. The blaze grew so large that people around me were worried that the engine was going to explode and frantically were telling people to back away from the blaze. Word was spreading that the Washington Post building in which this scene was next to was catching fire. The police realizing the severity of what was happening began to push forward into the crowd causing panic as they shot off tear gas canisters. The large mass of both media and protestors rushing to escape the situation created for a moment a dangerous stampede of people. The police then formed a protective ring around limousine as the fire was put out by first responders.

In the following hour the police set up a perimeter several city blocks wide around Franklin, Mcpherson, and Farragut squares. Because there were several city sanctioned protest events within these squares, there seemed to be some level of confusion within the police and national guard forces. For the rest of the afternoon this chaotic display unfolded of a protest concert playing in the background of a back and forth battle between “Black Bloc” anarchists and riot police in the street. Rocks and bottles were being tossed at the police who answered with tear gas, flashbang grenades, rubber bullets and pepper spray. Throughout the square smaller trash fires were being lit and surrounded by groups of people. I suspect the police worried about a PR nightmare if they were to crack down too forcefully, hoping that it would all fizzle out as the night came. At around 8:30 Franklin Square was still occupied by large groups of protesters and another confrontation between Trump supporters and protesters led to several more fights breaking out. Suddenly, the riot police began to move into the square and break up the remaining crowd in a very coordinated and strategic way. Those who were not arrested in this initial move by the police broke off into smaller groups and began to flee down different streets into other parts of downtown. The group I followed decided to attempt and reach the convention center, where the inaugural ball was being held. The police, realizing, this pursued this group with speed and intensity and eventually was able to surround it in an intersection. Realizing they were not going to be able to reach the convention center, they began to sit down and block the traffic in the intersection. After about 20 minutes, the police started arresting people who remained in the intersection and the day ended in an anticlimactic whimper. The end result the day’s violence was nine police officers injured, six of which were hospitalized, and 217 protesters arrested.

Based on what I saw that day, I believe that the violence and divisiveness will be the tone of the next four years of Trumps presidency. The level of anger that I witnessed leaves me very skeptical on whether any common ground will be reached