In 2009, New York Times’ Dr. Paul Krugman compared climate scientists today to Cassandra of ancient Greek mythologies. Through a series of circumstances, Cassandra was gifted by the gods with the ability to prophesize the future, but was also cursed that people wouldn’t believe her prophecies. Throughout her lifetime she predicted a number of deaths and disasters. Her warnings of these impending events, though, went unheeded, and the disasters played out just as she foretold.

Today, we don’t have Greek gods gifting us with the ability to predict the future, but our modern sciences are doing a pretty good job of picking up the slack. However, they too are going largely ignored as they warn us about the dangers of climate change.

Why? Why is it that a scientifically proven phenomenon is being locked in a debate over its existence? Media technologies have offered a unique platform, not only for climate science communicators but also for climate science deniers to argue their positions. As our technologies become more expansive components of our daily lives, science communicators have broadened their tactics of reaching wider audiences. The situation that exists today suggests that although the data are available to the public as clear evidence of climate change and humans’ influence on its increased severity, people still don’t address this as a problem. Furthermore, they don’t address it as a problem they have any relation to or power to change.

In the last decade, climate s 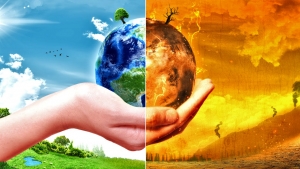 cientists have taken direct measures to better communicate their research to a broader public audience through a more expansive media approach. Reaching beyond print platforms, web-based strategies such as blog and social media outreach have aimed to provide comprehensive basics of climate change research and discussions on small and large-scale advocacy and action.

The Union of Concerned Scientists’ website works to spread information through videos and blogs to engage a wider group of internet users. ClimateCentral.org also works specifically to provide climate change information to a mainstream audience through multimedia. And these are just a few of many organizations and campaigns working in similar ways to utilize our technological society.

Youtube, television programs, and documentaries are full of initiatives to connect popular media users to scientific conversations. The discussion is present and available, and yet on a national scale we so easily choose to ignore or disregard this information or fail to find ways to apply this information to our own lives through preventative action and advocacy. Whether disengaged, dismissive, or uninformed to some degree, there are psychological foundations to our ability to tune out and turn away from environmental conservation, advocacy, and action.

Humans are easily influenced by confirmation bias. We have a natural tendency to engage and agree with information and individuals who reconfirm beliefs we already hold. Similarly, we have a more difficult time connecting with information that opposes our beliefs. This plays out in self-enforced limitations and a general narrowing of the sources of information we seek out. It is easier to read news that already flows with our understanding of the environment rather than something that completely disrupts what we think we know.

Similarly, accepting that climate change is a global issue, and accepting that our behaviors have had and are continuously having negative impacts on the world, creates cognitive dissonance. In the United States just as in other countries throughout the world, we have built our economy and many of our social structures around practices that prove to be wasteful and harmful. Admitting these practices are leading to larger consequences pertaining to global health both on an environmental level and a human level changes how we can view our behaviors.

If we know our actions are directly or indirectly harming others and harming our planet, we are caught in a moral and ethical struggle of what it means to maintain our behaviors in the face of this knowledge. Choosing to ignore the consequences, or instead choosing to downplay their severity or their connection to our actions, is easier than recognizing ourselves as part of the problem and altering our comfortable lifestyles to fix that.

This leads to the concept of risk assessment. A recent study published by the Yale Program on Climate Change Communication showcases that areas in the United States that are experiencing consequences of climate change are more likely to recognize and prioritize climate change as a global issue. As the study explains, these are nonpartisan results. Regardless of one’s political stance, you are more likely to address a situation when you see yourself directly being affected. This is a dilemma in the United States because we are not directly exposed to many of the consequences of our actions.

The toxic digital dump wastelands and devastating deforestation that result from our technological and paper product consumption, for example, leave many communities throughout the world with devastating health consequences and a diminishment of resources. A community facing the day to day struggles of existing during a drought will better relate to the science of climate change because they are experiencing it with a higher personal risk assessment.

So what does all this mean? If people aren’t listening to our modern day Cassandra foretelling the future, where do science communicators and educators come in? Where do people with firsthand experience of the consequences of our current actions come in? What role do science deniers play and why do they continue to hold such influential roles? What policies and structures are at play or could be at play to address these issues? How can we, as students and community members, be positive forces in addressing this ever-growing alteration of our planet?

Anna is a senior at Goucher completing a double major in Psychology and American Studies and a minor in Professional Writing. Beyond the attraction of writing articles, Anna joined the Q to work with the fun and quirky staff members!