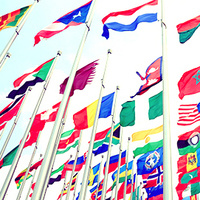 In Model UN, we had a toga party for our first simulation. I had a dark blue polyester bedsheet. Luckily, it was my extra sheet, so I still have one. Our first simulation was that of the Roman era when the king had just been overthrown so at that point, we had to deal with forming a government. I was the slaver which, in my opinion, was the best role to have because I knew a lot more about the topic whereas I knew little to nothing about the other characters.

In the simulation, we had a slave rebellion. Now, that I think back to it, I am not sure what ended up happening in that regard. We wound up electing our chief executive as a military dictator for a rule of one year. I voiced that that would be too short. At the end, she was ruler for 40 years and it became a hereditary rule meaning that her children would become the next rulers.

Another interesting aspect was that we had two pretend crucifications at the end because some of the members were political enemies. We might have had three had one of them not left early for another meeting. I overheard someone saying, “that is what the gavel is actually for.”

Our second simulation was a simulation of the Trump 2020 reelection campaign. In that case, I was the Health Care Advisor. I found that I didn’t speak up as much because I knew little about that area. What made this simulation so much fun was that other delegates were using accents to play into character plus we had a graph up front to measure our progress. We wound up promising that we would declare war on Iran which dropped our ratings. However, eventually we regained our poll numbers and were successful in our goal of reelection but this came after we had a crisis update where we had a breach in the US-Mexico border wall. Our solution, as part of our final resolution, was to give guns to everyone who was, I believe, in a 50-mile radius of the border. If we had more time, a few of us planned on dissolving Congress and making him eternal dictator. I recognize that this can be a serious topic in real life, but we were having fun with the topic in our mock simulation. When the SI tutor walked in a few minutes before the end of the session, she was laughing when she saw what was going on.

I started my Model UN experience in my junior year of high school. I joined my school club which led to two years going to the John Hopkins Model UN conference also known as JHUMUNC, two weeks of the Best Delegate summer Model UN program at Georgetown University, and a semester long course on Model UN. Throughout, all of these experiences I realized that crisis committees were my favorite as you could do secret behind-the-scenes actions. You also got to see the consequences of what happened with the directives and had to deal with it. Another aspect I enjoyed was the midnight crisis which I thought I would hate at first, but I loved! The midnight crisis entails getting woken up late at night and having to go down to do a special committee session.

My first crisis committee, in my second year of JHUMUNC, was a joint crisis committee on India-Pakistan in 1999. Our crisis was that of the Indian side when our newly-elected fictional prime minister was assassinated during a cricket match. The Pakistanis had a few people assassinated as well. We wound up going to war with Pakistan that night. Despite it being rather late, others were being quite descriptive about the weapons being used. I wonder if war would have broken out had it not been the midnight crisis. Nevertheless, war makes the crisis more fun even if it isn’t the most logical step.

I have found that high school and college Model UN aren’t that different. Goucher Model UN is going to four conferences this year. They are Georgetown, Norfolk, Harvard, and Gettysburg. Crisis here at Goucher is different than my previous experiences because we do not have back room crisis notes. I fully recognize that this is impossible as we wouldn’t have enough people. I’m hoping that I will be lucky enough to make it into a crisis committee at one of the conferences. To be honest, it would be fun to be behind a delegate assassination. Depending on the simulation, it is likely that an assassination will occur in most crisis committees.

As I can still remember my JHUMUNC experience from last year, it is proof that it is a memorable experience. One thing I find ironic is that I tend to remember character names better than actual names. If I do remember their name, I will always think of them as that name and then their previous character or country names for a long time too come. I have no idea if that is the case for other participants.

Model UN is great for both those with or without previous experience. I would recommend giving it a try so that you don’t miss out on the fun.