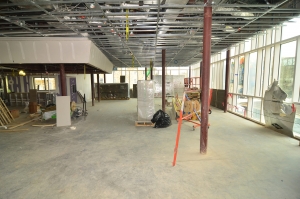 Come fall, the campus will be different. Fences will be gone, halls will be re-purposed and the center of on-campus dining will shift. What this dining will be like in practice is hard to say but there are plenty of concrete details that can be shared before the fall semester.

To begin, let’s talk about the new meal plans. For the upcoming year, the campus has shifted from a semester-long block meal plan to a weekly one. We used to have seven different plans (five if kosher and commuter are excluded) which have now been consolidated into four different plans (three if the commuter is excluded). The new plans are 10, 14, and 19 meals a week with $250 dining dollars and a commuter plan that is exclusively dining dollars although the amount is yet to be determined.

What this means is that, on the whole, prices per meal per plan are down, and those on the old 150 plan, if staying on the 10, will pay slightly less than last year. This does mean that the cheapest plan is now more expensive than it used to be. However, if you do need to change your meal plan, you will be able to change mid-year. Additionally, all first years will be required to be on the 19-meal plan. Norman Zwagil, a Manager for Bon Appetit, said this decision was made in order to reduce food insecurity on campus and to make it easier to manage meals week by week.

On the dining hall side of things, Stimson, Huebeck, and The Van will all be closed starting next fall, replaced with the new dining facility in the building that used to be Pearlstone. Alice’s will remain open and the Gopher Hole, a late-night hangout that has been closed since construction began, will re-open. There has not been any confirmation on the Gopher Hole’s re-opening date as it is not run by Bon Appetit.

Inside the new dining hall will be two areas to grab food, one requiring a meal swipe and one that takes dining dollars as well as meal swipes (during certain hours). The one that takes dining dollars will be located where the old bookstore used to be and will function like the old Passport Café (Pearlstone) used to and how Huebeck currently functions. There will be grab and go

options, both hot and cold, as well as a full visible grill, a pizza station, an ice cream station, an entrée station, and an expanded deli/salad station. Two registers will service this section.

The other dining hall will be upstairs and there will be two stations where you can swipe to enter the food area. According to Norman, it will be all-you-care-to-eat and will contain a multitude of stations, such as the Mongolian Grill (which can make stir fry), the Bakery that is currently in Huebeck, a Kosher station, Global Bowl, Entrée, Allergen Free, Salad bar/deli, Breakfast, Piatti (pizza, calzones, pasta) and two beverage stations. How this will be laid out within the space has not been made clear as of yet.

Another new aspect of dining will be mobile ordering, which will allow a student to call up the dining hall and they will prepare the order for you. While details on this are still being figured out, it seems this will be useful for those with allergies and those on the go.

In terms of what will be done with Huebeck, Linda Barone, Associate Director of Planning, Design, and Construction, says that they’ll be able to open the wall back up and use it as a multipurpose space. “The thing that’s missing most right now on campus is general meeting space, spaces for presentation, so that space, when you open up the wall, can hold about 250 people. With the wall closed, each side can hold about 100. The lounge [in Huebeck] will become—what is currently now seating—will turn back into a lounge.” As for the Stimson dining hall, she says that they’re taking out all the equipment, all of the refrigerators will be gone and that the tables in the middle will also be gone.

Elias Rosner is a Senior English/Creative Writing Major here at Goucher. When he's not stalking the Goucher woods seeking serenity, he's writing feverishly in the hopes something interesting will be said. He's always on the lookout for a good puzzle or story and is still not used to writing about himself in the third person.