In Sabaa Tahir’s fantasy world of An Ember in the Ashes, Martials train as ruthless Masks at Blackcliff Academy to protect the Empire, and all other races are subjugated to their rule, including the Scholars, some of whom lead an underground Resistance against the oppressors. The novel alternates between the perspectives of Laia, the daughter of two Resistance leaders executed for treason, and Elias, the bastard son of the Commandant of the Mask-training school Blackcliff. In order to rescue her only surviving relative from torture, Laia agrees to spy for the Resistance as the Commandant’s slave in return for the Resistance rescuing her brother. Elias yearns for freedom from his violent future as a Mask, yet he is named an Aspirant, one of the four Masks competing to be the heir to the throne when the Emperor’s line fails. In an unexpected twist of fate orchestrated by the immortal Augurs who facilitate the Aspirant Trials, Laia’s and Elias’s destinies weave together.

Between the setting descriptions, introductions of supernatural beings, character names, and flashbacks, the world-building is exquisite. There is no moment of stagnation throughout the 445 pages: whenever a resolution seems plausible, another complication arises. All of the tension and suspense build up to the last chapter, which perfectly sets up the sequel instead of reaching a resolution (and that sequel, A Torch Against the Night, was recently published). Furthermore, the characters are well-rounded: they’re motivated by their guilt and grief, and their romantic interests are signs of their humanity rather than a distraction from their goals.

Because of the variety of elements, An Ember in the Ashes will satisfy a wide audience. The assortment of supernatural creatures will appeal to the fantasy and sci-fi audience. The romantic sub-plot will grab the attention of romance readers. Since there is both a hero and a heroine, both genders will find empowerment. Although the Empire isn’t dystopian, lovers of the dystopian genre will enjoy this book because of the characters’ ultimate involvement with the Resistance. The origins and values of the characters in Harry Potter are emulated in both Laia and Elias, widening the audience even further. But it’s not for the faint of heart: graphic instances of violence and torture will likely trigger a visceral reaction for many readers.

While a preface orienting Laia’s and Elias’s stories in the context of the Trials and the Augurs from the begging would’ve made the book even better, as would’ve straightening out the few instances where the alternating perspectives confused the timeline, An Ember in the Ashes deserved all the awards it earned. Such awards include Amazon’s Best YA Book of 2015, People’s Choice Award Winner—Favorite Fantasy, and Bustle’s Best YA Book of 2015 in addition to it being an instant bestseller.

After devouring Ember and its sequel, A Torch Against the Night, you’ll join the hoards of readers anxiously anticipating the release of Book #3 in 2018, to be followed by a fourth. Even better, Paramount owns the movie rights to Ember, so we should have the opportunity to experience the incredible story on the big screen in the (hopefully near) future.

If immaculate world-building, fantastic character development, and perfect pacing are what you look for in a book, Tahir’s An Ember in the Ashes deserves a top spot on your To-Read list. 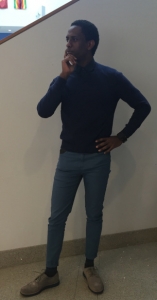 AS: What are you wearing today?

Wonde Pawlose: “I am wearing a pant and sweater and a shirt and shoes”

AS: Who do you think is the most stylish professor at Goucher?

WP: Professor Danny Kimball. He’s a communications professor. He’s always dressed up very well. Yeah, I had his communications class last spring and everyday he hasn’t failed to look great and be very stylish. I also like Zahi Khamis’ scarves from Mexico.

AS: Why do you like to dress so nicely?

WP: I mean in my culture in Ethiopia we are supposed to look our best every day. Whether you are rich or poor, you are supposed to clean what you have and dress well which is presentation. Also, for me, when I dress well, I feel well, which means I will have a very productive day. And also, I dress well to radiate positivity for other people.