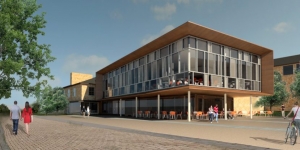 This was the first of a series of updates that will occur every other Friday at 3pm in Heubeck Dining Hall Room A. Although the next update will likely be the same presentation they gave on the 17th, once the construction gets moving, the meetings will be updates about what has happened and what changes have been made. The meetings give students the opportunity to ask their questions, see an interactive digital 3-D version of the Mary Fisher Project, and watch a video about how the Wolfe House & Building Movers Company will move the Froelicher building across the street. Future updates will take place on the following dates:

In the meantime, if you have questions, please contact Lee Block, our GSG Senate Representative and Chair of the Student Life committee at leblo001@mail.goucher.edu .

The reason there hasn’t been much progress is because there is a permit pending to carve a temporary access road between the chapel and Bacon for moving building materials. Once they have the permit, this temporary road will be built and the Mary Fisher Lawn will basically turn into a temporary parking lot.

Bacon, Dulaney, & Hooper will remain open as residence halls for the duration of the project. For those living in Bacon, there is an area of refuge within the fence so that in case of an emergency, you can exit the building at any exit. In such an instance, public safety will let you out from within the fence. Otherwise, the area around Mary Fisher enclosed by the fence is completely off limits to students. Public Safety monitors the cameras that overlook this off-limits area.

Two additions will be made to Mary Fisher in addition to completely renovating the interior of the building as it currently stands. Ultimately, the top floor will be the only all-you-can-eat dining hall on campus, featuring a Mongolian Grill and a large seating area. A retail dining hall (think former Pearlstone/current Heubeck) will be on the entrance floor. The Office of Student Engagement (OSE) will have an entire wing in the final building.

Mary Fisher is projected to be complete by Summer 2018, so current Sophomores and First-Years will be here to enjoy its services.

Sometime between June and July, Thorman & the Froelicher courtyard will be demolished, but Alcock, Gallagher, & Tuttle will literally be picked up and moved to the SRC side of the street where the basketball court, swingset, and old garage are located now.  Expect to see some digging and pipe-laying on the SRC-side of the road in mid-to-late March to prepare for this move. Attend a future construction update meeting to see a video of the Wolfe House & Building Movers Company in action! This decision to move Froelicher instead of demolish it will be half as expensive as building a new building and save a lot of time.

The First Year Village: this summer-2018

Once Froelicher moves across the street, the construction of Buildings B & C where Froelicher currently stands will begin this May when the semester ends. For safety reasons, a fence will be built around the entire construction site, closing the current pathway from the Residential Quad to the SRC and P Selz. Consequently, until the buildings are complete in 2018, you will have to walk to Loop Road in order to reach the SRC from the Res Quad.

This project will hopefully begin this July and be complete as of January 2018 to the left of the Chapel.

This will be located behind the President’s House. Toward the end of this summer, some trees will be removed back there in order to grow grass for the horses to pasture. The reason for this edition to campus is that the current paddocks are too small for the amount of horses that we have.

An addition and renovations to this outdated building are projected to begin in 2019.

But what about Stimson?

According to Barone and the Whiting-Turner Team, a lot has to happen before this. The current plan is to demolish Stimson Dining Hall to plant a grassy area once the new Mary Fisher opens in Fall 2018. In the early 2020s, they will demolish one section of the Stimson dorms at a time. Senior Apartments will be built in this space.

Goucher has a permit to rezone this area and is in the process of talking with developers to build something on this land as an additional source of income for the college. Some trees have already been removed in this area.

Where will everything be?

The Post Office is in its permanent location. The self-service lockers are here to stay. The Bookstore will continue to do online books as they started this semester and its current location in the ATH by Alice’s is also its permanent location, “At least for the foreseeable future,” according to Linda Barone. Whether the Commuter Lounge will move back to its former location—where OSE is now—is unclear.

No construction will be happening there, but there will be some internal changes. The current conversation is how to make better use of the Info Commons Space. The computers aren’t going away, but they will likely be moved. Speak to a Librarian for more information and to share your ideas about how future changes can serve how you use the library resources.

One of the students in attendance raised the concern about the trees that will have to be removed in the construction process. Barone said that the law requires them to replace every tree they remove and that they are making an effort to take down as few as possible.

Another question was about the plan to use a ton of glass in the Mary Fisher editions like the Athenaeum. 6 windows in the ATH have shattered in the last 6 years for no explainable reason, despite many engineers investigating the situation. John, the Whiting Turner Project Manager, says that the shattering glass is a “freak accident” and that they can’t do anything to prevent it from happening in the future buildings other than build the building correctly. The glass panels are designed to expand and contract with the changing temperatures, and hopefully will not shatter in the future.

There are still a lot of questions to ask and concerns to raise. Please attend future updates in order to join the conversation and ensure that all your concerns are addressed before the construction is finalized.

Erika DiPasquale started as a copyeditor for the Q in the fall of 2016, and took over as Associate Editor for the spring of 2017. She manages the administrative tasks for the publication, regularly writes book reviews, and contributes a features or news article every so often. Erika also reviews submissions for the Preface Literary Magazine and Verge Journal for Undergraduate Writing and is a Writing Center Tutor. She will graduate in May with a degree in English with a concentration in creative writing and a minor in book studies, and dreams of a career as an Editor of Children's Literature. Erika graduated in May 2017.