All students have complained about a professor or an assignment or a particularly bad incident in a classroom at least once in their lives. Maybe you’ve written these complaints in an end-of-course reflection or approached a professor directly about the issue. But how do faculty know the best ways to resolve these issues and navigate the feedback they receive? What can they change in order to make the next renditions of their courses more successful?
As of last year, Dr. Robin Cresiski at the brand new Center for the Advancement of Scholarship and Teaching (CAST) is that support system, which will “provide resources to faculty to help them be the best teachers and scholars they can be.”

Cresiski will help faculty integrate the latest research in effective teaching in their classrooms, promote undergraduate research, and cultivate student success. “Making faculty happier without increasing student performance is a failure,” according to Cresiski.
There is a variety of ways she is and will be undertaking this role. Faculty workshops and Lunch & Learns about a variety of topics are one route. The topics are selected from a survey Cresiski administered to faculty at the beginning of the semester to gauge the ones that are most in demand among Goucher’s faculty. Topics include “best practices for week 1,” “transparent assignment design,” and a variety of topics surrounding inclusivity and accessibility. While attendance is optional and some professors’ schedules may conflict with such workshops, Cresiski is working on a website where recordings of all the workshops will be available for faculty to consult if they could not attend.
She is also available for individual consultations to help faculty revise areas of their curriculum where students are falling asleep, to discussing ways to address a classroom incident, to anything else faculty made need support for. Faculty research is another area Cresiski will help with, such as thinking about research design and organizing research into a publication plan. Faculty may reach out to her or may be referred to CAST by another faculty member, administrator, or department chair. When faculty wish it, Cresiski will also observe their classes.
“The administration was very forthright with me about various issues on campus before I came forward,” says Cresiski, “[such as] the change in curriculum and the video from students about their experience as diverse students on campus. I am absolutely going to be a resource for faculty to make their classrooms more inclusive.”
In an effort to confront these issues, Cresiski has already started collaborating with the Academic Center for Excellence in order to help faculty reinforce the messages that ACE tells students and the Center for Race, Equity, and Identity about not only the Phoenix Program, but also what kinds of faculty programming CAST and CREI can collaborate on.
“Several of the workshops will revolve around helping faculty make their content and curriculum and lessons accessible and engaging for all students,” Cresiski promises. “There have been limited opportunities for faculty to learn how they might do that up to this point.” She cites the transparent assignment design workshop as an example of how she will empower faculty to be more inclusive. “Faculty that make just two of their assignments more transparent have smaller equity gaps between white and non-white students and between continuing and first generation students.” She also knows that addressing the issue of inclusivity and accessibility will require deeper work, more self-reflection and confrontation of the implicit bias one has when regarding examples used in class, hiring students for research or teaching assistant positions, and orchestrating class discussions.
Cresiski’s previous experience has definitely prepared her for this new role at Goucher. After completing a PhD in Immunology and serving as a visiting biology professor at Mt. Holyoke College (she will also teach biology at Goucher), she was hired at a small start-up college in Nevada where more than 50% of the student body were students of color, 67% were first generation, and almost all were low-income. Cresiski helped build a biology program and an undergraduate research program before becoming an administrator. As an administrator, she oversaw faculty development because she had become “very interested in developing faculty practices, especially in relationship with students who are very different than themselves and their experiences.”
In order to best serve the faculty, Cresiski is trying to figure out the best way to get feedback from students about their experiences with faculty at Goucher: “I’m a nice neutral resource…I’m nobody’s boss. So if students would love to see something happen differently in a classroom, I’m a place where they can come talk to me and they’re not getting anyone in trouble.” She’s hoping to figure out how students can compare and contrast their experiences and point out trends that they see, which students currently don’t have the opportunity to do in end-of-course reflections. Other colleges have advisory committees or pizza hours, which Cresiski has considered. In the meantime, she has been in conversation with ten students from a variety of disciplines that Dylan Margolis from GSG put her in contact with. She intends to form a working group including these students to think about the new center pair exploration courses—curriculum development being another aspect of faculty support that CAST will be a large part of.
In the meantime, students are welcome to email Robin.Cresiski@goucher.edu their ideas about how things could be better. She’s also welcoming students to tell her about really positive experiences they’ve had with faculty so that she can highlight such great teaching in her faculty newsletter.
“I’m really excited to be here!” Cresiski says, not only because her great-grandmother was a Goucher alumna, but also because she is “so inspired by [President Bowen’s and Provost Lewis’s] dedication to building Goucher into an accessible, transformative liberal arts institution.” Their dedication to accessibility is very important to her and she’s excited to contribute to the process of implementing the changes that will ultimately achieve this vision. 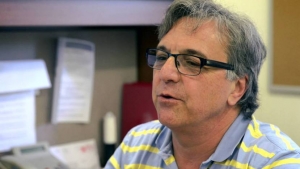